USA CONTRACT SOLUTIONS PROVIDING YOU WITH

You're One Contract Away From Scaling

"POSSIBLY THE MOST VALUABLE, STRAIGHTFORWARD BLUEPRINT ON HOW TO WIN GOVERNMENT CONTRACTS REGARDLESS OF YOUR AGE OR EXPERIENCE…"
⭐⭐⭐⭐⭐ 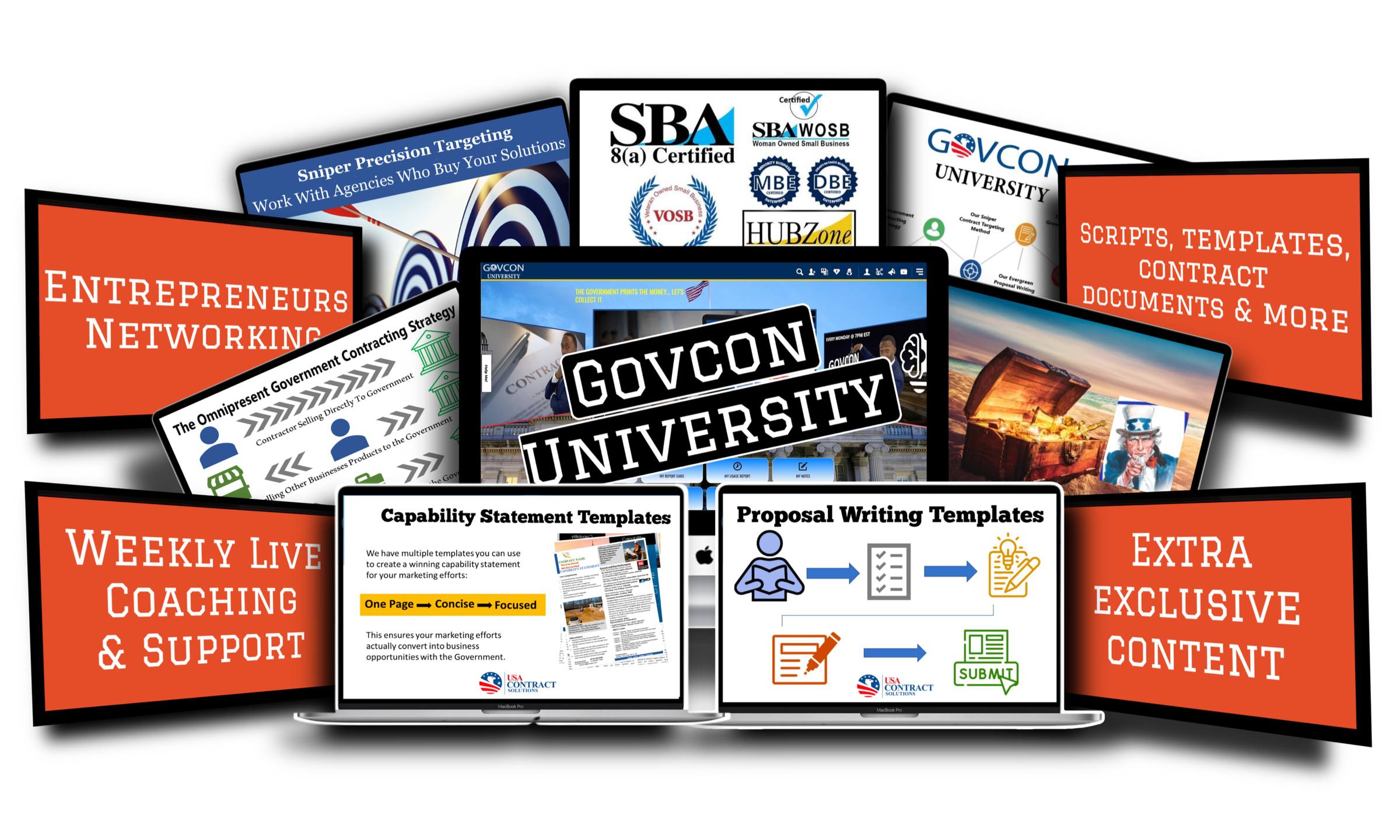 A WORD FROM DESMOND

“Government Contracting isn’t an industry you can just come in and figure it out as you go."
You can make A RIDICULOUS amount of money in government contracting, but only when you’re properly educated on how to do it the right way.
If you enter this industry blindly, you’ll find yourself out of money and out of business.

When I first started government contracting, I made a lot of mistakes.
I almost went broke.
But guess what?
I wouldn't take it back for a SECOND!
I learned so many valuable lessons, what NOT TO DO & also the industry secrets nobody tells you when you start out...
And now?
I have a successful Government Contracting Business that generates me and my family a large and expanding income.
This means I live MY LIFE on MY TERMS... and YOU CAN TOO.
That's what this whole program is about: helping YOU get into government contracting and doing it THE RIGHT WAY, THE FIRST TIME.
Govcon University is a COMPLETE BLUEPRINT on winning Government Contracts and scaling your very own Government Contracting business...
Without having to spend thousands of dollars and your precious time trying to figure out how it all works...
And for those who are already doing Government Contracting, the content in this course will literally sky rocket your business to the next level!

SO TELL ME...ARE YOU READY TO CLAIM YOUR PART OF THIS 7 TRILLION DOLLAR INDUSTRY, JUST LIKE HUNDREDS OF OF AMERICANS ARE DOING RIGHT NOW....
⭐⭐⭐⭐⭐
USA Contract Solutions has been a phenomenal resource as WE STARTED OUR GOVERNMENT CONTRACTING COMPANY! We would not have been able to be as successful this quickly without Desmond's guidance.
- Michael B.
⭐⭐⭐⭐⭐
I absolutely love the blueprint outlined in Govcon University. I started government contracting months ago before I met Desmond, and I was completely lost and frustrated with attempting to research information that just wasn't there or wasn't clear. This program made the difference, it kept me from quitting, and I will be forever grateful.


- Chanel C.
⭐⭐⭐⭐⭐
This course was absolutely amazing. I followed each step in the step and WAS UP AND RUNNING WITHIN 3 MONTHS...This course was life changing. You cannot go wrong by enrolling in this course.
- Antonia W.
⭐⭐⭐⭐⭐
"Desmond, your course is worth WAY MORE than you charge. Continue to be a blessing to the masses! The work that you do is unmatched, and your cup will continue to overflow.  THANK YOU! THANK YOU! THANK YOU!"
- James B.
⭐⭐⭐⭐⭐
I NEVER thought I would have MY OWN GOVERNMENT CONTRACTING COMPANY UP AND RUNNING IN 3 SHORT MONTHS!?!?! USA contract solutions created a training portal that explains simple steps to becoming a contractor. If you can follow directions you can become a very successful contractor by following simple steps on the training portal, its just that simple!


- John D.
⭐⭐⭐⭐⭐
I purchased last December and had my first government contract last week. Don't wait, don't contemplate, just buy it and follow it to a tee. Desmond I thank you brother from the bottom of heart for changing my family's future. My kids, thank you.
- Robert A.

I SEE IT TIME AND TIME AGAIN, PEOPLE JUMP INTO THE GOVERNMENT CONTRACTING MARKET WITH ZERO EXPERIENCE, AND ZERO GUIDANCE... HERE ARE THE

BUT WAIT! IT'S NOT ALL DOOM AND GLOOM...

YOU WILL ABSOLUTELY CONQUER IT IN THE GOVERNMENT CONTRACTING INDUSTRY (JUST LIKE HUNDREDS OF AMERICANS ARE DOING RIGHT NOW) ALL YOU HAVE TO DO IS FOLLOW THE BLUEPRINT!

THERE IS NO REASON YOU SHOULDN'T BE MAKING $300K MINIMUM ANNUALLY. PEOPLE WHO HAVE TAKEN THIS COURSE ARE MAKING THIS KIND OF MONEY, AND YOU CAN TOO.

From an early age, Desmond Acha wanted to start his own business and help create employment opportunities for other people.
This passion is what drove him to venture into business and eventually getting his CDLs to build a transportation empire.
While driving, he stumbled into government contracting and knew this was his calling.
He dropped everything and focus on Government contracting.
However, he soon realized that things weren't going to be as easy as he thought when his expenses became more than his income.
The lack of profitability led to him pausing his business, but that didn't kill his dream.
Despite having no experience in Government contracting, or having no connection to people he could look up to in that industry...
He leveraged his business degree and got a job working for a consulting firm responsible for $22 Billion dollars in Government contract award.
There he learned everything at the highest level...even working on $100M proposals.
He took everything he learned at the highest level along with his experience and created a step by step process to win Government contracts.
Less than 30 days later, he won his very first Government contract.
After winning his first contract and scaling his business to multiple 7 figures. He keeps pursing contracts for his businesses but chooses to also help small businesses do the same.
Desmond started then created USA Contract Solutions specifically to help small business win Government Contracts.
Since then, he's spoken at various events and helped 650+ small businesses successfully enter the Government market and generate over 8 Figures in revenue for their respective businesses. 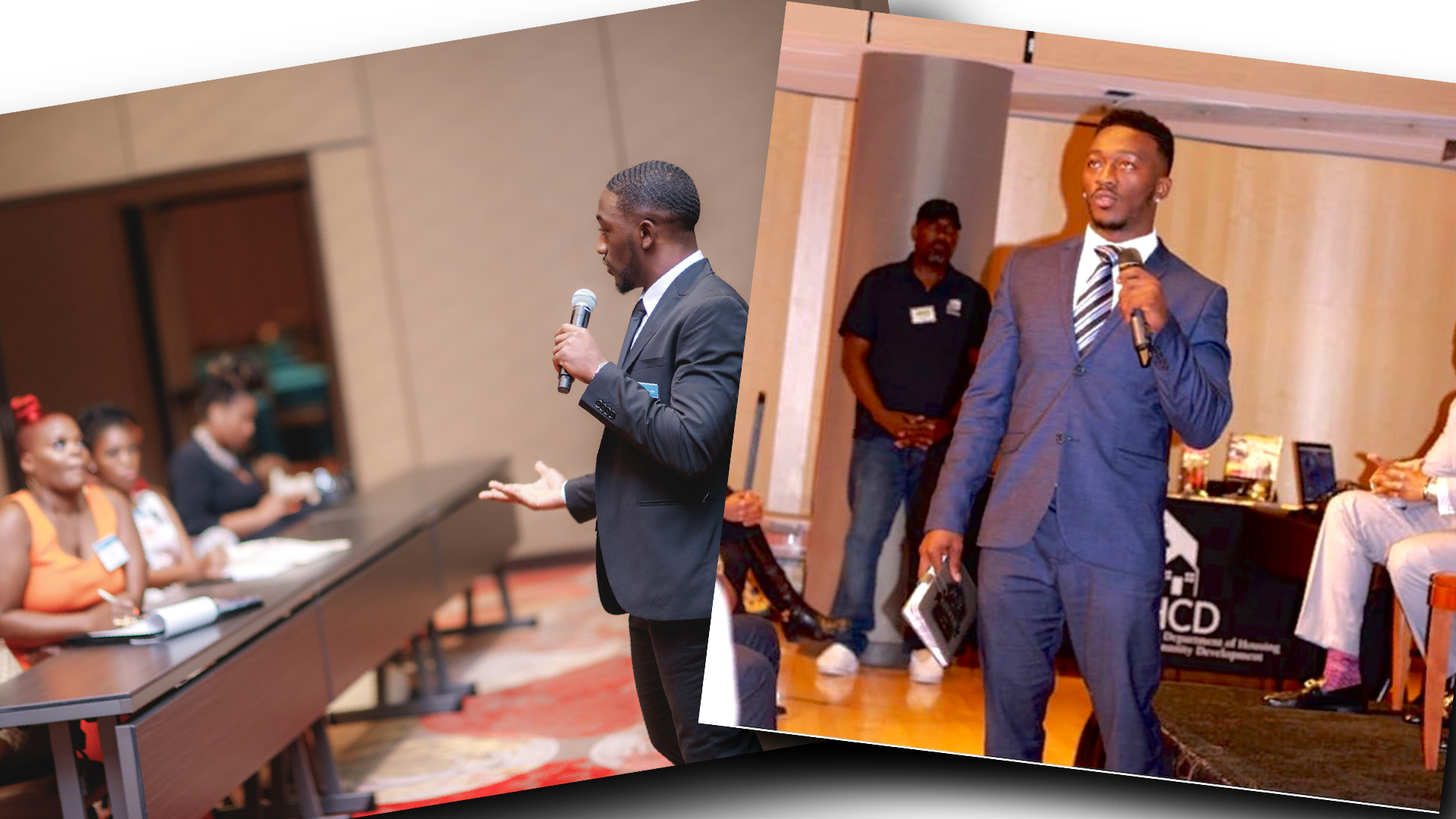 Today, Desmond is the founder and owner of USA Contracting Solutions- home of the #1 training platform in Government Contracting where he motivates and teaches small businesses how to become successful Government contractors.
His story is one that continues to be an inspiration to numerous people, and that's mostly because most people can resonate with it.

SAVE TIME AND MONEY

With the right information, right strategy and the complete blueprint.

Knowing you have everything in place before winning contracts.

Knowing all the strategies to win Government Contracts

By know where and how to find lucrative contracts to win

The Government is the biggest and wealthier buyer who always pays on time.

By knowing what to say and do in order to win more contracts.

By knowing how to read, understand and write winning proposals.

By using the formula we give you to scale your business and succeed the first time.
CLICK HERE TO JOIN YOUR COURSE

ALONG WITH EVERYTHING YOU NEED TO KNOW, YOU WILL HAVE Q&A TIME
WITH DESMOND

When you choose to invest in yourself with the Weekly Coaching Sessions, you can join our game changing weekly coaching calls. Each session we do screen shares to find contracts, write proposals and support you in any capacity you need. We also discuss different topic to gain competitive advantages, we have special guests and Q&A sessions! We give you all the latest government contracting news and keep you informed on vital industry changes and much more.

CHECK OUT HOW OUR STUDENTS' LIVES HAVE CHANGED AFTER COMPLETING THE PORTAL...

"THIS IS THE ONLY COURSE OF ITS KIND, AND IT WILL TRANSFORM YOUR LIFE JUST LIKE IT HAS MINE"
- Ray Williams 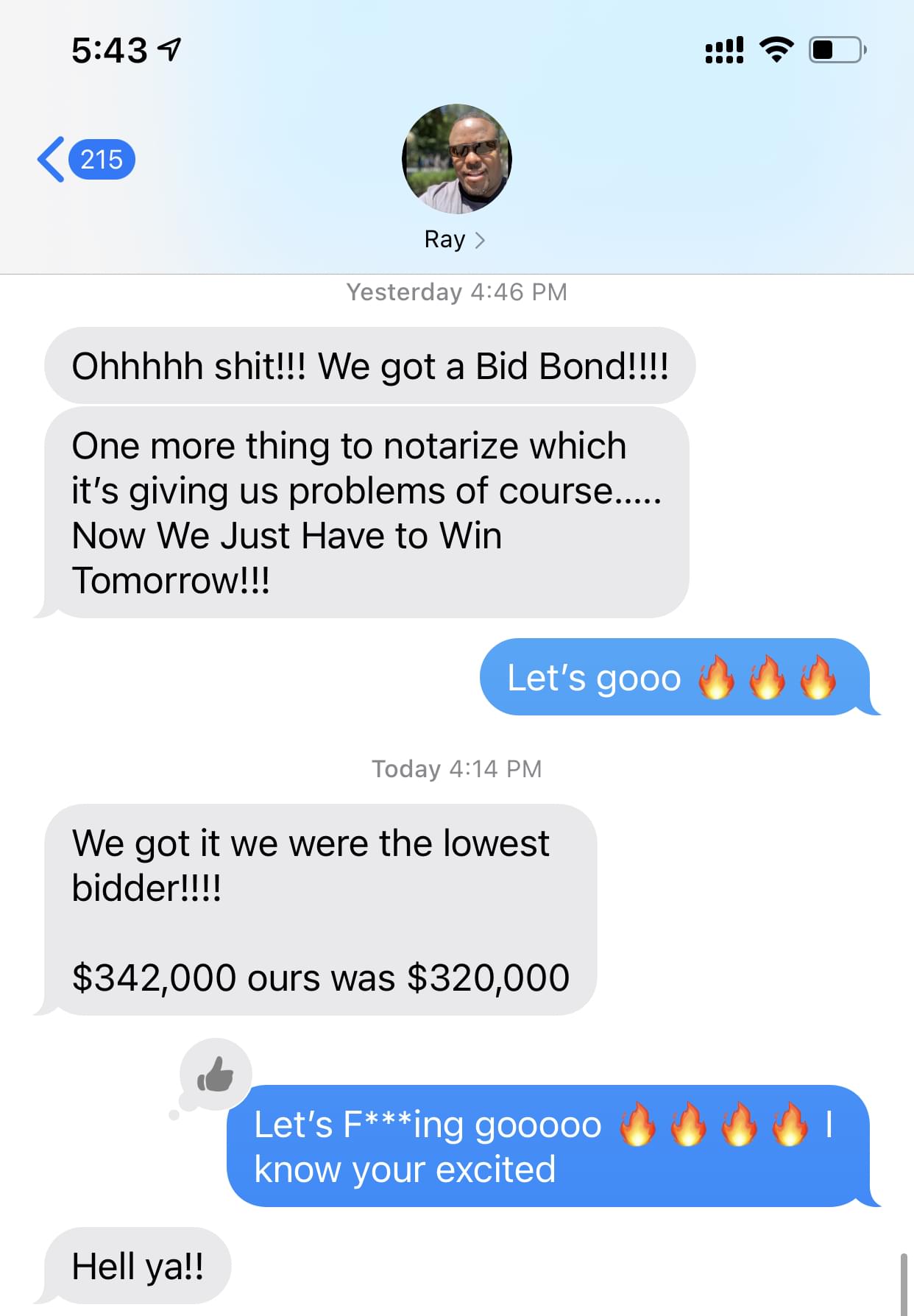 SO WHAT ARE YOU WAITING ON...

AND GET STARTED ON WINNING YOUR FIRST OF MANY GOVERNMENT CONTRACTS THE RIGHT WAY, THE FIRST TIME.

THE QUESTION IS... ARE YOU READY TO WIN? 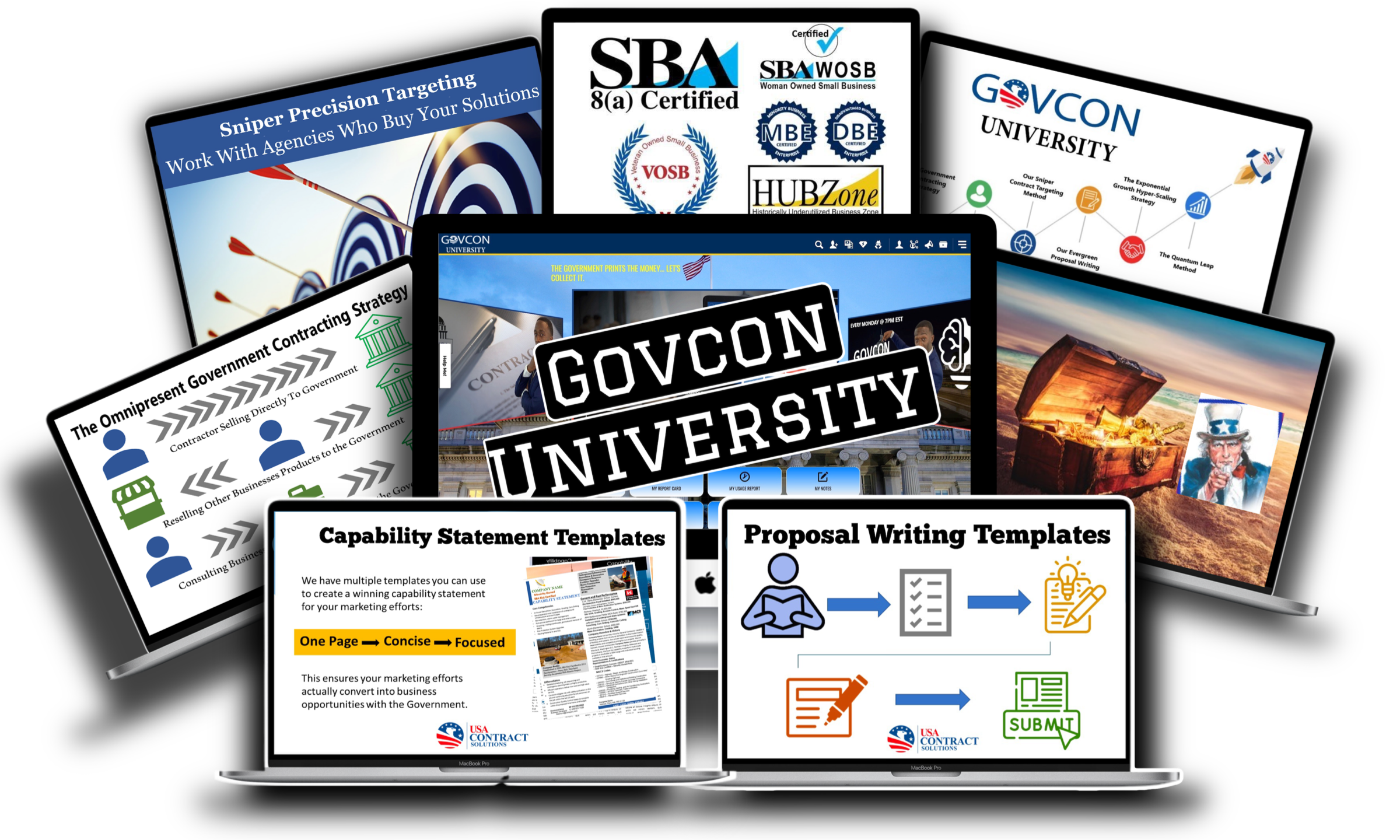 "THE PERSON YOU WILL BE IN
FIVE YEARS IS BASED ON
THE ACTION YOU TAKE TODAY." 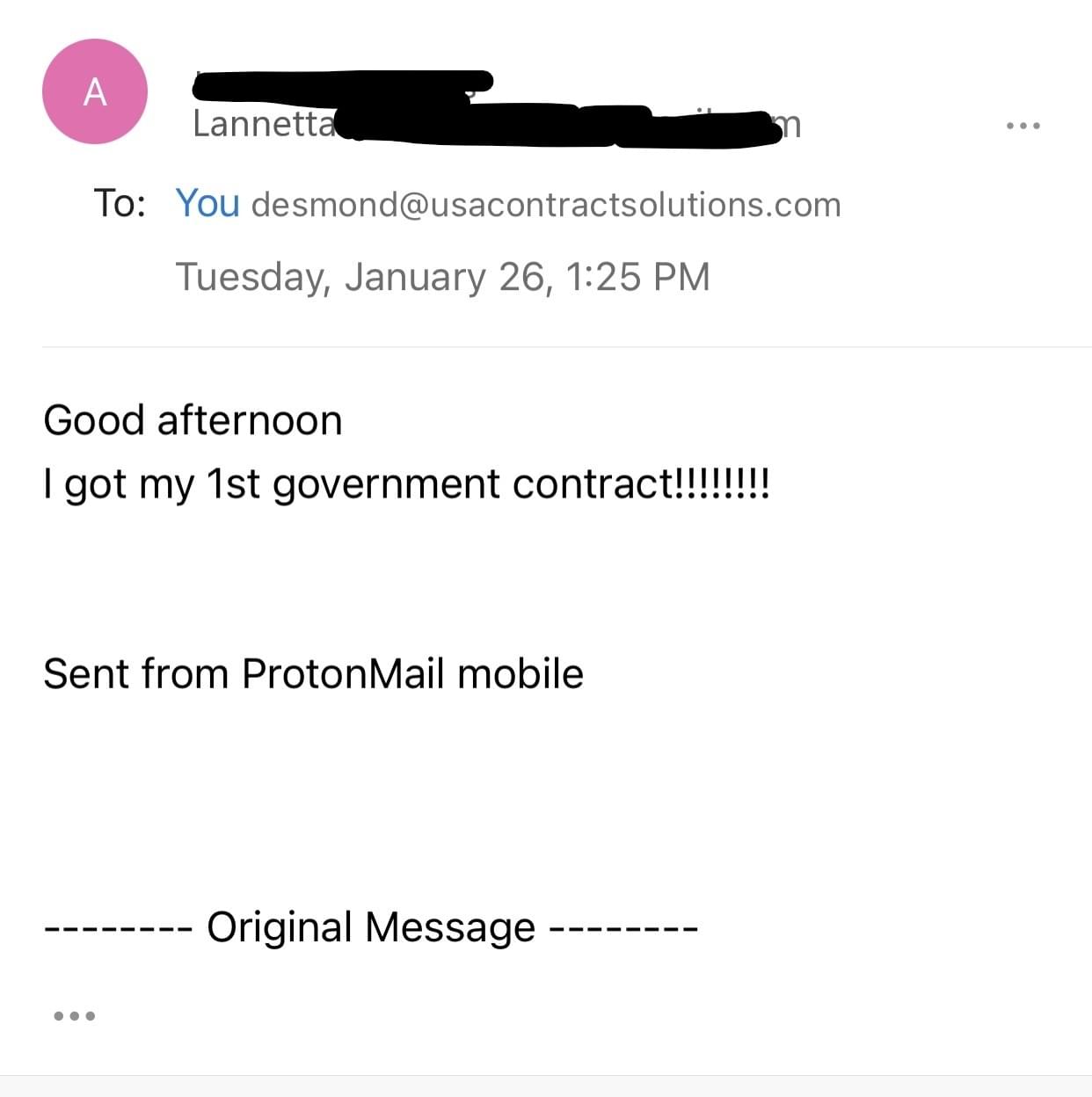 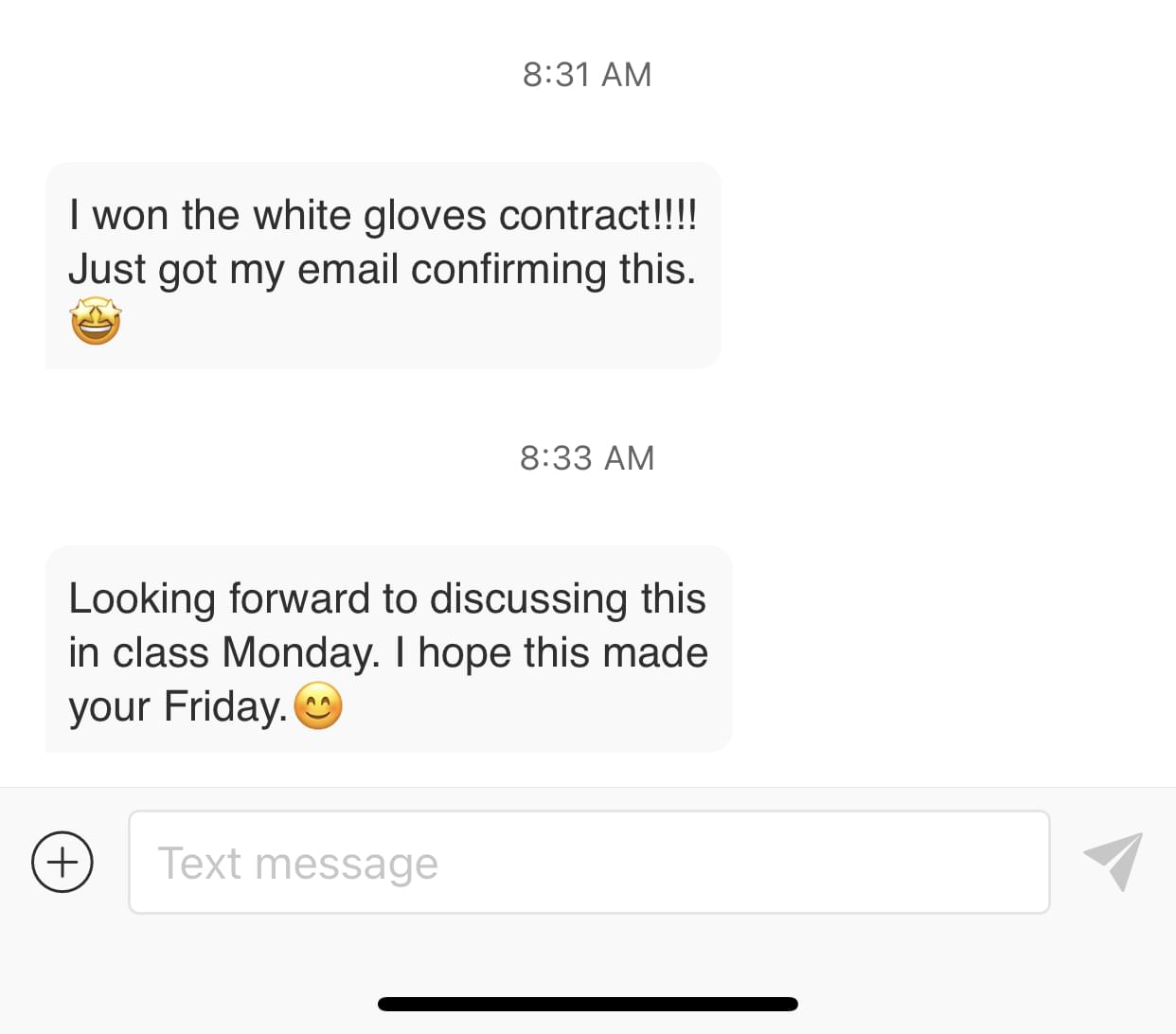 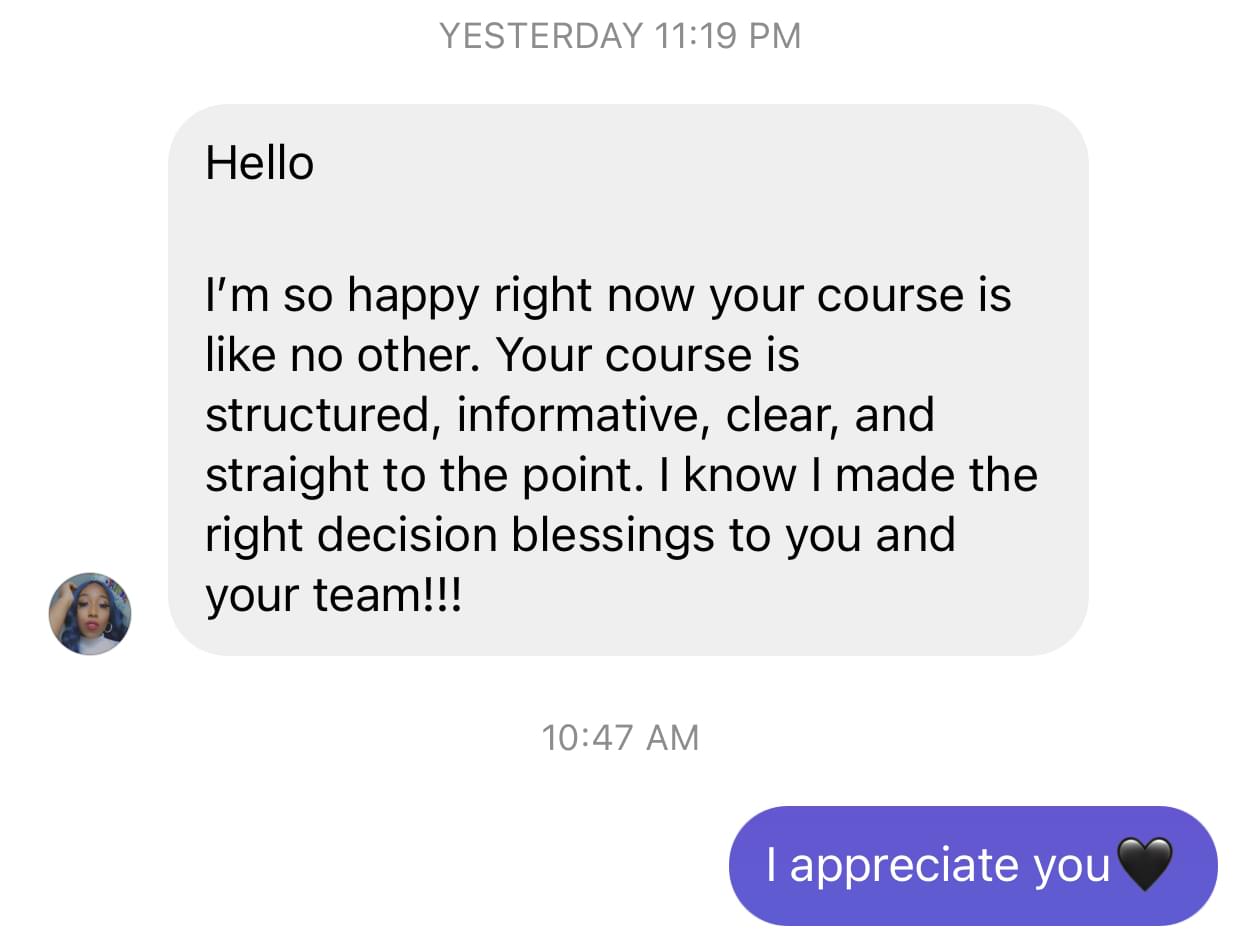 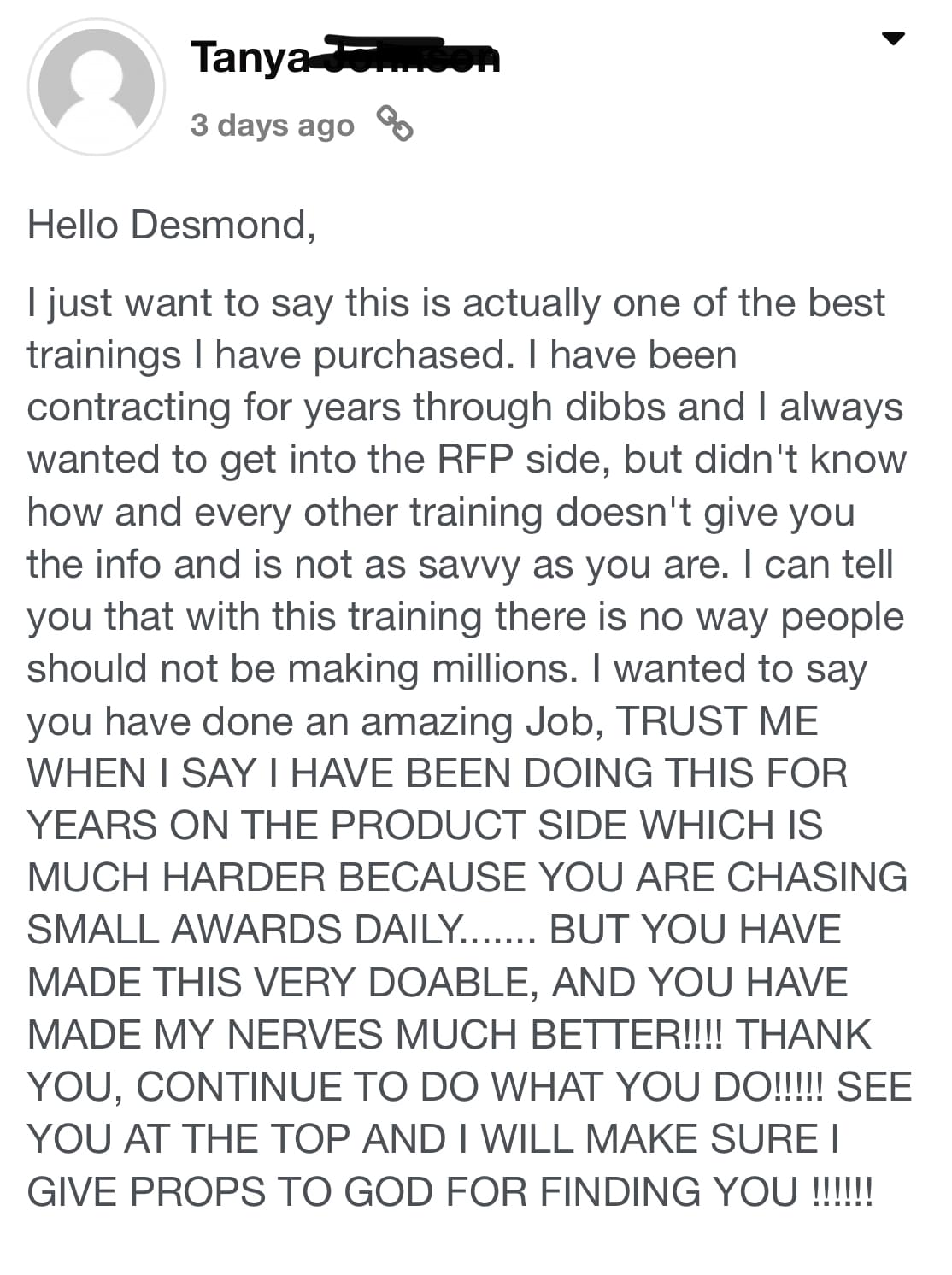 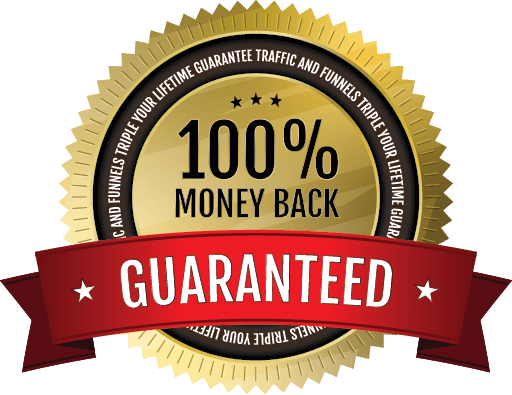 And here are the terms of your 100%
Money-Back, 30 Day Guarantee

If you don’t see a dramatic improvement in your business, or for any reason you’re dissatisfied with your investment today…


All you have to do is create a support ticket by emailing Support@GovconUniveristy.com. They will refund every penny of your investment right away…